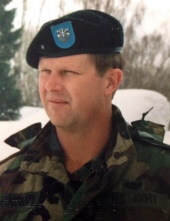 Skip graduated in 1968 from Anniston High School in Anniston, AL. He voluntarily enlisted in the United States Army in 1970. Skip was a true patriot who proudly served. He was a paratrooper and a Green Beret in the Armed Special Forces during the Vietnam war. Skip also served in the Army National Guard from 1984 to 1990.

After his honorable discharge from his military service, Skip attended the University of Alabama where he earned a B.A. in Anthropology (ROLL TIDE!). Skip started his adventurous career in the U.S. Forest Service as an Archeologist in 1979. He covered an incredible amount of territory in the inland northwest and the southeast. His favorite area to explore was the Lemhi Mountain Range in eastern Idaho where he spent an extensive amount of time during the 1990’s.

Skip was an avid outdoorsman. Not only did he spend his professional career as an Archeologist exploring and researching, he also primarily spent his time hunting, fishing, camping, hiking and climbing. Skip would tell you his best memories included sharing his love for the outdoors with his three daughters.

A service will be held on Monday, November 8th at 3:00pm at the Georgia National Cemetery in Canton, Georgia.

In lieu of flowers, memorial contributions can be made to Comfort Farms/STAG VETS, INC. https://www.stagvetsinc.org/who-we-are in Charles Willingham’s name.
To order memorial trees or send flowers to the family in memory of Charles Gordon Willingham, please visit our flower store.