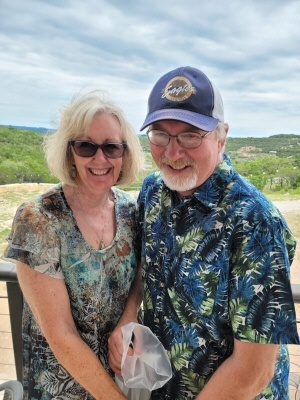 Alan Luedtke was born October 12th, 1955. He was the oldest of four children born to Don and Lola Luedtke and grew up in Arcadia, Nebraska. He and his siblings were named in alphabetical order because his mother was a librarian in college. Brian Luedtke, of Columbus. GA, Curt, of Hemet, CA and Denise (and Jim) Tatro, of Denver, CO were the next three siblings. Al is survived by his wife of 44 years, Deb, Woodstock, GA; son Austin and Jen Luedtke, Granddaughter, Josslyn of Atascadero, CA; Eric Luedtke and Nicky Smith. Kennesaw, GA. He was his cat, Coco's favorite person.

Al had an impressive career, starting at the University of Nebraska Kearney, where he earned a Bachelor of Science Degree in Chemistry, and more importantly where he met his wife, Deb. He would go on to earn a PhD in Chemistry at the University of New Orleans. He spent most of his career as a new product developer for DuPot, working on the frontline of stain resistant agents for polyamide fibers and indoor air quality research related to textiles. His career progression led him to become a Global Product Steward, giving him the opportunity to travel the world for many years. In both 2014 and 2020 he was recognized by the University of Nebraska Kearney Department of Chemistry as a Dr. Don Fox Anniversary Award guest lecturer for outstanding career achievements.

For the last decade of his life, Al had the fortune of working for Innovative Chemical Technologies, a small chemical manufacturer in Cartersville, Ga, where he loved his work and those he worked with. It was there he was able to return to his passion of research and development in the field of organic chemistry, developing new specialty coatings and novel fluorosurfactants. He also got to work closely with his son, Eric, on a daily basis.

Al was an avid hiker, and one of his fondest memories was climbing Mt. Kilimanjaro not long after his 50th birthday. He also loved golf. On the day Al unexpectedly passed, he worked a half day in the morning, played golf in the afternoon in weather that was "just bad enough to brag about", and had beers afterwards with his good friends at the neighborhood Irish pub. It was a perfect day.

We love you Al. You will be dearly missed.


There will be a Gathering of Friends (and Vikings) Thursday, January 27, 2022 at 4pm-6pm. Place: The Tavern at Towne Lake, 1003 Towne Lake Hills East, Woodstock, GA 30189. Casual dress, jeans are fine. Stay warm. There will be drinks and snacks. You can stay as long as you like. Al used to say he'd like a Viking Funeral, so that's why the Gathering is so named.
At 6 pm, whomever wants to attend can go with us to the lake on the 4th hole of the golf course to witness the Viking send off.

To order memorial trees or send flowers to the family in memory of Alan E Luedtke, please visit our flower store.