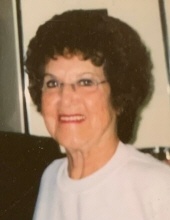 Betty Stephens Rogers, age 86, of Woodstock, GA, passed away quietly on February 22, 2022. She was born on August 27, 1935 at home in Finger, TN, daughter of the late Paul Leonard and Allie Mae Mitchell Stephens.

Betty graduated from Columbia High School, Chattanooga TN, 1954 and later attended Knoxville Business College, and met Bill. Once married, she stayed home with her 3 children until they became school age, at which time she went to work in the local Fabric Center and later became manager, until retiring 17 years later.

Betty was an incredible seamstress – not only making clothes for the kids, but she also made cheerleading outfits, costumes and dress suits for Bill, even recovering furniture.  She also loved gardening and cooking – which is what her grandchildren remember her best for.  She could do anything she set her mind to.

Upon retirement, they moved to Cleveland GA where they were members of the First Baptist Church.  Betty moved in with her oldest daughter, Diana (Woodstock) in November 2017, after Bill fell ill.

In addition to her husband and parents, Betty is preceded in death by two brothers, Bobby Stephens and Eddie Stephens, and two sisters, Brenda Stephens and Katy Redmon. Betty and Katy both passed on the same day, within 2 hours of each other; they were inseparable in life as well as death.

To order memorial trees or send flowers to the family in memory of Betty Stephens Rogers, please visit our flower store.