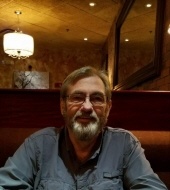 Billy (Bill) Gene Houston, 74, passed away peacefully at home in Marietta on Thursday June 3, 2021. He was surrounded by his loving family.Bill was born October 23, 1946, in Sheffield, AL. He was the second of seven children born to Grady and Susie (Highfield) Houston. Proceeded in death by his parents, sister Joyce Ann and brother Mark (Terri). Survived by sisters Brenda (Robert) Dudash of Omaha, NE, Karen (Ricky) Crunk of Decatur, AL, Donna Houston of Florence AL, Jerri Hudson of Florence, AL.As a child, Bill, known as Buddy by his family loved being outdoors, watching nature, fishing, tinkering with anything mechanical. A 1965 graduate of Rogers High School in Greenhill, AL, Bill was the quarterback of his high school All State football team. Bill enjoyed other sports and had wonderful memories of his years at Rogers.Bill met his wife Paula (Chandler) in Selma, AL. After a short courtship they began their 51-year journey through life together. Calling many stops home during his Air Force and Department of Defense career.They were devoted parents to a son Kevin (Amy) of Suwanee, GA and a daughter Cathryn (Michael) Jacobs of Acworth, GA. They welcomed five grandsons Zac (Holly) Carter, Jackson Houston, Chandler Clinton, Graham Houston and Brooks Houston. Then blesses with three great granddaughters Alie, Jossie and Madelyn Carter.His great love of airplane and mechanics was a catalyst to his career in the United States Air Force and Department of Defense. He had a tour in Thailand/Vietnam where he earned a Purple Heart. He was a member of the honor guard. Later a remote tour to Korea. He worked on the Space Shuttle outside of New Orleans, LA.He loved God, animals, making and flying RC airplanes, photography, sports and enjoying home and family. Bill will be honored in a Military Ceremony on June 21, 2021, at 11:30 am. Georgia National Cemetery in Canton, GA with Poole Funeral Home & Cremation Services directing.

To order memorial trees or send flowers to the family in memory of Billy Gene Houston, please visit our flower store.