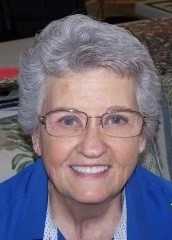 On Friday, July 1st, 2022, Elaine Anna Paterson, loving wife and mother of three, passed away at the age of 86.

Elaine was born on July 5th, 1935, in Hinsdale, IL to Emelia and Frederick Pawl. Elaine and her family moved to Burbank, CA where she later met Alexander Paterson, her future husband of 63 years. After a brief, two-week courtship, Alex proposed and the two were sealed in the Los Angeles Temple in 1958. Together they raised their daughter, Laura, and two sons, Scott and Brian.

A devout Latter-Day Saint, Elaine found joy and satisfaction in her years of service to the church. She served many callings; Primary President, Stake Primary President, Relief Society President, and later in life, more than 12 years of Temple work. At church and at home, Elaine was an eager and active participant, helping raise her many grandchildren. She took great joy in being with family, particularly her 11 great-grandchildren. Elaine was an avid reader, enjoyed puzzles and board games, and was wonderfully competitive. On any given day she could be found gleefully defeating her adversaries (her grandchildren and their spouses) at various word games. Elaine loved her family unconditionally.

Elaine was preceded in death by her mother, Emelia, and father, Fred, as well as her brothers Richard and Edward. She is survived by her husband Alex, three children, Laura Paterson (Bob Hodge), Scott Paterson (Ronda), and Brian Paterson (Teresa), 10 grandchildren and 11 great-grandchildren. A funeral service will be held at noon on Friday, July 15tha at  Poole Funeral Home in Woodstock, GA. In lieu of flowers, donations can be made to the charity of your choice.

To order memorial trees or send flowers to the family in memory of Elaine Anna Paterson, please visit our flower store.