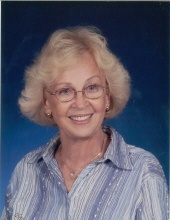 Esther Christine Lloyd went to her Heavenly home on Saturday, December 18, 2021. She was born in Highland, IL on August 4, 1934, to the late Alfred and Elizabeth Huland. Esther moved to Columbus, GA in 1966 where she devoted most of her time raising her five children. In 1972, Esther received her Associate degree as a nurse's aide and enjoyed caring for patients at a medical practice for over 10 years. She married Donald Richard Lloyd in 1978 and they moved to Woodstock, GA in 1997. Esther's main source of pride and joy were her husband, her children and her grandchildren. She was a devout Christian and a member of Woodstock Christian Church where she enjoyed volunteering at the food and clothing banks and participating in church activities. Her favorite activity was gardening, and she always had a beautiful yard for all to enjoy. She also enjoyed reading and spending time with friends and family talking and playing games. She loved her music and enjoyed dancing, often found dancing by herself in her living room. Esther had a kind heart and a wonderful sense of humor and always enjoyed making others laugh. She was a devoted wife, a loving mother and grandmother, a dedicated nurse and caregiver and a faithful follower of Christ. She will be deeply missed and forever loved.

In addition to her parents, Alfred and Elizabeth Huland, Mrs. Lloyd was preceded in death by her husband Donald R. Lloyd in 2004, her son Mark Sussenbach in 2006, her grandson, Brad Renfroe in 2020, and her brother Ernie Huland in 2021.

A graveside service will be held for family members on December 22nd at 11:00 at Rolling Hills Cemetery in Acworth, Georgia with Rev. Daryel O’Barr officiating.

In lieu of flowers, the family requests donations be made to WellStar Tranquility Hospice at Kennesaw Mountain, or a tree be planted in her honor.

For God so loved the world that he gave his only begotten Son that whosoever believeth in him shall not perish but have everlasting life. John 3:16

To order memorial trees or send flowers to the family in memory of Esther Christine Lloyd, please visit our flower store.