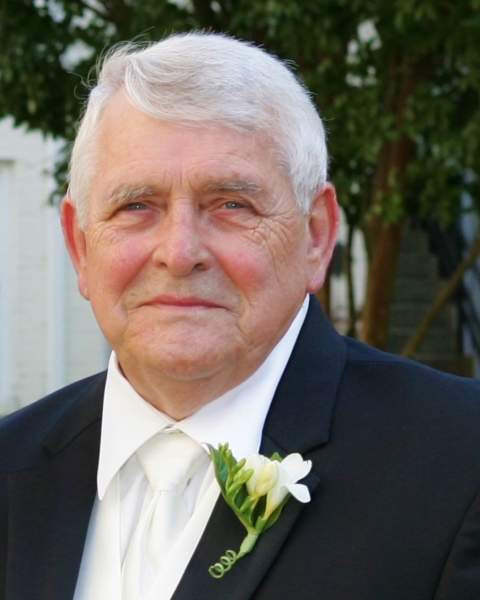 Foster Rawlings Peavy of Woodstock died peacefully on August 11, 2022, at the age of 81, following a short battle with cancer.  He was in his home with his loving wife and best friend of 54 years, Billie, by his side.  Rawlings was born in Milledgeville, Georgia, on December 13, 1940.  He was the son of the late Doris Peavy Arnold, and had one younger brother, Jerry Carl Peavy.

Rawlings received his high school diploma from Sparta High School in Sparta, Georgia.  Several childhood friends and classmates fondly commented that “He was one of the most popular people in school; a wonderful guy with a great sense of humor -and a superb athlete.”

Upon graduation, Rawlings went to work at the Georgia Kaolin in Macon.  He soon realized that advancing his education would be beneficial to his job aspirations and began working on his college degree at Middle Georgia University.  It was in Macon that Rawlings met and began dating a “pretty young gal” and teacher, Billie Anderson.  However, with the winds of the Vietnam War beginning to gust, Rawlings decided to put his educational aspirations temporarily on hold and joined the National Guard, and in the Spring of 1967, he was sent for training to Fort Lewis just outside of Tacoma, Washington.

Later that fall, Rawlings enrolled at the University of Georgia.  He and Billie were soon engaged and married on June 9, 1968.  While Billie taught physical education at a school in Atlanta, Rawlings was able to focus on his college courses full time, successfully earning a Business Degree from UGA in 1969.  Upon receiving his degree, Rawlings took a position at IBM in Sales & Marketing.  After 25 years at IBM, and always a whiz at numbers, he made a career move into Financial Advising, where he enjoyed success for 10 more years until eventually retiring at age 65.  However, never one to sit still for very long, Rawlings quickly realized he was not cut-out for the slow pace of retirement, and as he said, “I was too old for golf, and I couldn’t just sit around the house,” so he joined-up with some fellow retired friends who would meet every morning for coffee, then ride together as a group shuttling brand new cars around Atlanta for Enterprise Rental Cars.  Rawlings would say, “I know it sounds strange, but it was like our private club, and it might have been the most fun job I ever had!”

In 1969, Rawlings and Billie welcomed their son, Brett, followed in 1972, by their daughter, Andrea.  In 1975, Rawlings and his family moved to Acworth and eventually built a new home in Woodstock.  He loved this area and would spend countless hours on Lake Allatoona water skiing and fishing, as well as camping in the North Georgia mountains.  “Some of our fondest memories and funniest stories come from camping trips with family and friends,” said Andrea.  Rawlings was heavily involved in both Brett’s and Andrea’s lives as they were growing up, and as his son said, “Dad was a stalwart volunteer in concession stands at Etowah High School,” where Brett played football and baseball, and Andrea was a varsity cheerleader and played on the tennis team.  As Andrea commented, “my parents were always welcoming of our school friends and enjoyed having them in our home.”

Rawlings loved playing golf, but later in life he most enjoyed spending his free time with family.  He truly adored both his grandchildren, James (12) and Catherine (10), doting on them constantly -and they likewise adored their “Paw-Paw.”  Billie and Rawlings viewed babysitting their grandchildren as a privilege and never once declined the opportunity.  Without a doubt, Rawlings was James’ biggest fan and constant sports sounding board; likewise, he was Catherine’s “personal play toy,” tirelessly spending endless hours allowing her to serve him “play-ice cream, hot dogs and hamburgers” from her toy rolling concession cart.  Later, as James and Catherine began getting older, rare was it that he and Billie ever missed a single baseball, football, basketball, or competitive cheer competition.

Rawlings and Billie loved to spend time traveling together, enjoying trips to the low country in South Carolina, the Florida panhandle along 30-A, Amelia Island, the mountains of North Georgia, and celebrated their 80th birthdays with a trip to Highlands, and Asheville, N.C.  Having never visited the Outer Banks, Rawlings and Billie traveled there just this past October, a place he found “stunningly beautiful.”  Rawlings loved new travel experiences, and as Brett said, some of his fondest memories of his dad were the many road trips the two of them took when he was an adult to away Georgia football games.  From the Dawgs annual Cocktail Party in Jacksonville, Florida, to Baton Rouge, Louisiana; from Oxford, Mississippi, to Knoxville, Tennessee; Rawlings was always up for a Dawgs’ Road Trip with his son.  Regardless of where he was traveling to, Rawlings was always determined to find the best barbeque restaurants around.  If you knew Rawlings, you knew how much he loved barbeque!

To brighten his days while battling illness, his family recently presented him with a digital picture frame loaded with almost 1,500 digital photos and videos.  While culling through thousands upon thousands of family photos, it became even more apparent to Brett and Andrea just how involved their parents have been in all our lives.  They were present at every family Christmas and Thanksgiving, every Halloween and Easter, every school play and musical.  Rawlings and Billie were such a joy to spend time with that their children, along with their spouses, could not imagine planning vacations without them.

Rawlings was dearly loved by many as he was a great husband, brother, father, grandfather, uncle, great uncle, and friend.  He is survived by wife Billie Anderson Peavy; son, Brett Anderson Peavy (Julie); daughter Andrea Peavy Claussen (Jim), and their children, James Gilliam Claussen, Jr., and Catherine Anderson Claussen; and younger brother, Jerry Carl Peavy, of Florida.  In lieu of flowers the family requests, if inclined, to consider donating to the American Cancer Society.  Interment of ashes will be held during a private Celebration of Life ceremony at Billie’s family farm in Anniston, “Once the weather turns cooler and it feels like football season!” –Rawlings’ favorite time of the year, and one of his favorite places on Earth.

To order memorial trees or send flowers to the family in memory of Foster Rawlings Peavy, please visit our flower store.