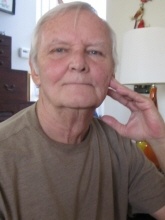 Mr. Gary Wayne Dickey was born September 13, 1944, in Pittsburg, Kansas. He attended elementary schools in Pittsburg and Joplin, Missouri. He graduated from Pryor High School in Pryor, Oklahoma in 1962 and promptly enlisted in the United States Air Force. He served 21 years, earning the rank of Master Sergeant and was a reservist until 1992. He continued working for the Air Force in the Kaiserslautern Military Community, German. Upon his retirement in 2003, he received an Outstanding Civilian Career Service Award for his 41 years of federal service.During his military career, he served two tours during Vietnam War and was stationed in Thailand and Taiwan. He was also stationed in Wichita, Kansas, Grand Forks, North Dakota, Abilene, Texas, and Knob Noster, Missouri, and spent the remainder of his service stationed at Ramstein Air Force Base, Germany, with the 86th Supply Squadron providing computer support. He received an oakleaf cluster accommodation.He was not one to talk about his service, but when asked about electronic communication, he said he sent his first email in 1971.Gary' mother shared her love of music with him, and he was a multi-instrumentalist during his youth, singing and playing guitar and bass guitar in rock-n-roll and country band. Mr. Dickey was preceded in death by his parents, William Thomas, and Erma Elizabeth Watson Dickey; his oldest son, James David Dickey; a brother, Billy Jack Dickey. He is survived by his loving wife of 33 years, Joy Dickey, Woodstock, GA; by a daughter, Gillian Kay Mims; two sons, Eric Wayne Dickey and Nicholas Wayne Tomlinson. 11 grandchildren, Allen Dickey, Ava Dickey, Emmy Mims, Jacobus Djuren, Jasen Phillips, Len Feik, Dalton Tomlinson, Sadie Tomlinson, Noah Tomlinson, Anslee Tomlinson, and Madeline Tomlinson; four great grandchildren.A committal service with Full Military Honors will be held at 1:00 pm Monday, August 16, 2021, at Georgia National Cemetery. The family will go to the cemetery in a procession leaving from Poole Funeral Home, 1970 Eagle Drive, Woodstock, GA 30189 at 12:00 pm. Online condolences may be made at www.poolefuneralhome.net

To order memorial trees or send flowers to the family in memory of Gary Wayne Dickey, please visit our flower store.