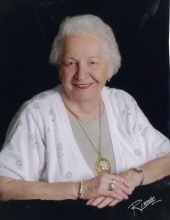 Hazel Audrey Byers was born on February 13, 1933, in Brooklyn, New York.  Hazel transitioned to the afterlife on February 27, 2022.  She grew up as a younger sister riding her tricycle and playing with dolls.  She graduated from Bushwick High School.  Her first job was at age 14 working at the Irving Square Public Library.  After that she was employed at Chase National Bank.  She worked 7 years as a secretary for Pan American Airlines at the Chrysler Building in Manhattan.  At an Eastern Star meeting she met her future husband, Arthur Byers.  They were married in 1957 and honeymooned in Mexico, Cuba and South America.  The couple resided in Glendale, Queens, New York.  Their first son, Kenneth was born in 1958 and three years later, she delivered her second son, Robert in 1961.

The family moved to Commack, Long Island in 1963.  Hazel performed household duties for her family with love, compassion and thoughtfulness.  She was always active in helping the youth sports programs, scouting activities and church functions at Commack United Methodist Church.  In 1968, she was elected as President of the Marion Carll PTA.  As her boys got older, she took a job with Eastern National Bank and then with New York Telephone where she worked as a company representative.  Her hobbies included cooking, crocheting, sewing and supporting her sons’ sports teams.  Baseball was her favorite sport, and she was a lifelong Brooklyn Dodger and New York Mets fan.

In 1986 her and her husband, Arthur relocated to Acworth, GA following the lead of their sons, Kenneth and Robert.  They both adjusted to a comfortable lifestyle and were very happy to live close to their sons.  She took a position with the Bank of Canton for 17 years and became very close with the local community.  Being a member of the Bascomb United Methodist Church, she also acted as a coordinating secretary.  Another social aspect both Hazel and Arthur enjoyed was being part of the local Acworth VFW Post 5408.  Vacations, cruises and family getaways to places like Las Vegas, California, Texas, Arizona, New York and Mexico highlighted their summer activities.  Hazel was extremely proud of her son’s achievements, Kenneth as Assistant Chief with Atlanta Fire and Rescue and Robert as a Senior Patrol Officer with the Atlanta Police Department.

Hazel embraced and thoroughly enjoyed the birth of her grandchildren, Jennifer Lynn in 1989 and Bryan John in 1992.  She and her husband were incredibly loving caretakers and mentors to both grandchildren.  Their impact is evident if you know Jen or Bryan.  During the decline of her husband’s health, she was the sole caretaker until Arthur’s death in 2013.  After that her family maintained her wellbeing with family activities, holiday events and occasional trips to Destin, FL and New York.  In 2019, her milestone as a Great Grandmother was achieved with the birth of Rose Marie Byers and Eleanor Ann Jones.  Baby Hogan Jones was born in 2021.  This was a very special time for her with these girls.  The kids called her by the nickname “GG”.

Hazel Audrey Byers lived a long and rewarding life.  She made big adjustments moving to Georgia late in life and experienced the best from her family.  She was thoughtful, understanding, hardworking, diligent, compassionate and most of all loved her family to her utmost ability.  She always got the task accomplished regardless of the difficulty or the challenges.  Until the end, she was a fighter, but God made his call and she answered it.  She is survived by her sons, Kenneth and Robert Byers, her daughter-in-law, Kelly, her grandkids, Jennifer Jones and her husband, Alex Jones, and great granddaughter, Eleanor Ann Jones, Hogan Audrey Jones and Bryan Byers and his wife, Julie Byers and great granddaughter, Rose Marie Byers.

To order memorial trees or send flowers to the family in memory of Hazel Audrey Byers, please visit our flower store.