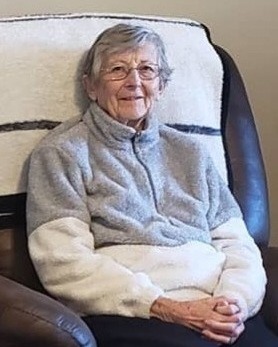 Jean Large was born at Eddyville, Nebraska on the Rohde Ranch to Philip Edwin and Clara Belle (Strohmyer) Darby. She joined an older brother, Philip Edwin Darby, Jr. (nicknamed Eddy) and four years later, they were both joined by a little sister, Joan Claire Darby (Smith).

Jean grew up on the Darby Farm, which was three miles west of Lexington, just off Hwy 30 and near Darr. She graduated 8th grade at Dawson Co. S16, graduated 12th grade at Lexington High School in 1950, and later in May, 1971 graduated from Kearney State College (now University of Nebraska at Kearney) with a Bachelor of Arts degree in Elementary Education. She taught 12 years in Nebraska rural schools, worked in the security department at Convair, in Ft. Worth, TX, 3 years in the claims department at Allstate Insurance Co, also in Fort Worth. She bought and managed the Hollingsworth motel in Lexington, Nebraska after her children were grown. She then sold the motel to IBP, a meat processing plant, which is now Tyson.

Jean was married to Glenn Sterling Large (from Elizabethtown, KY)  from May 25th, 1954 to 1975. They had two children, Debra and Daniel in Fort Worth. They moved to a small farm in Phelps County, Nebraska south of unincorporated Odessa, NE in 1966 where they lived for approximately 10 years. They divorced in 1975 and Glenn passed away in 1978. Jean remarried Howard Large in 1982 and they divorced in 1987.

Jean moved back to the family farm on which she grew up after her father passed away. She was there for many years before moving to Senior Housing in Lexington, Nebraska. There she enjoyed visiting with her neighbors and playing the piano. She loved it when guests dropped in such as her cousins, Carolyn Evans, Mike Strohmyer, Susie Strohmyer, Nikki Kriz, nieces,nephew, siblings and friends to name a few. Jean moved from Lexington, Nebraska to Woodstock in October, 2020. For most of that time, she lived in assisted living and make quite a number of friends.

Jean is survived by her daughter, Debra Luedtke of Woodstock, GA and her son, Daniel Large and his wife, Michelle, of Denver, CO. Jean’s Grandchildren are Austin Luedtke (and Jennifer Allred) of Atascadero, California; Eric Luedtke (and Nicky Smith) of Kennesaw, Georgia, Chris Large of Ft. Collins, CO, Jake Large of Denver, CO, Samantha (and Ryan) Clement of Windsor, CO and Drayvin Trujillo of Lakewood, CO. She has a Great Granddaighter, Josslyn Rae Luedtke, of Atascadero, and three Great Grandchildren: Roy Lee, Gemma, and Calem of Windsor, CO. She is survived by both her siblings: Joan Claire Darby Smtih (and Carl William Smith) of Broomfield, CO and Philip Edwin Darby Jr. of Grand Island, NE along with eight nieces and a nephew.

To order memorial trees or send flowers to the family in memory of Jean Elaine Large, please visit our flower store.