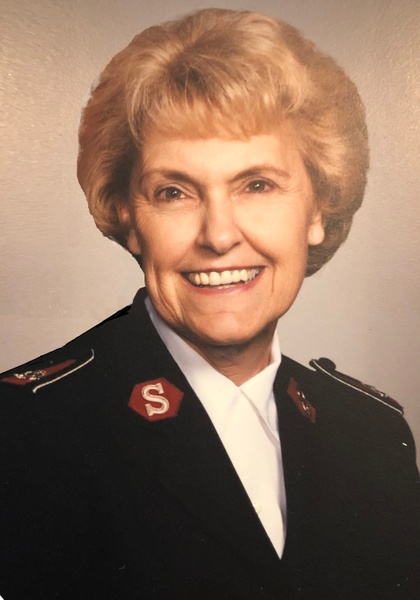 Margaret Ruth (Gay) Thompson had an amazing life as a Salvation Army officer, wife, mother, and friend.  She recently died after a long struggle against Alzheimer's Disease.   During those years of sickness her family and friends held firmly to the truths that sustained Ruth her entire life:

God is real and God is good.

Ruth was ten years old when she met The Salvation Army and gave her life to Jesus.  The family moving from rural Georgia into the city of Atlanta so they could access  public transportation. They moved into a neighborhood where The Salvation Army had just begun an outreach ministry.   After school Ruth would watch them, in their blue uniforms, as they marched into the Clark Howell Housing Projects lead by flags and tambourines.  These “open air” parades captured Ruth’s  attention and their love of Jesus captured her heart.  When she shared her life story Ruth would often say, “The Salvation Army were the most beautiful people I’d ever seen and I wanted to be just like them.”

She flourished as she took part in their faith based after school activities.  She understood the love of Jesus personally through the investment of the leaders she interacted with.

She gave her life to God and even as a child she wanted to honor Jesus and what he had done for her.    As a young adult she became a Salvation Army officer.

She was working in San Angelo, Texas when she met Alan Thompson (an airman originally from Connecticut who was stationed at Lackland Air Force base, nearby).  They married and eventually embarked in what would become a 35 year ministry with The Salvation Army.  Together they helped men and women devasted by addiction to recover and reclaim the lives God intended for them.  Their first assignment was in 1969, in the Bronx (New York City).

They were uniquely suited to each other and to the challenges of Salvation Army ministry.   Together they served as administrators of recovery programs in Worcester, MA,  Mount Vernon, NY, Philadelphia, PA, Providence, RI, and Boston, MA.  In 1998 The Salvation Army honored them with a promotion to the rank of Lt. Colonel in recognition of their enterprising and outstanding leadership.

Throughout their lives they held tightly to God and to each other and demonstrated God’s love and truth in their work, their friendships, and their family.  Ruth remained in active service after the painful loss of her husband in 1999.  In 2004 she retired to Old Orchard Beach, ME.  In Old Orchard she walked 4 miles each morning.  Her service to the community continued even in this, as she stopped at the stores along her route each day to uplift and encourage the staff working there.

Upon a diagnosis of dementia Ruth relocated to Manchester, Connecticut and lived with her daughter and son-in-law, Beth and Peter Russell.  She passed away in Woodstock, GA where she had moved to be near her beloved sisters Joyce Cravero and Brenda Camp.

Her remarkable life and legacy is celebrated by her children, Gretchen and Larry Schuse, Beth and Peter Russell, and Mark Thompson, and grandchildren Alan Schuse, his wife Stephanie, Daniel Schuse, and Eliza and Ethan Russell.

A graveside service will take place at Kensico Cemetery in Valhalla, NY on Sunday, June 26 at 1:00 p.m..

To order memorial trees or send flowers to the family in memory of Ruth Thompson, please visit our flower store.