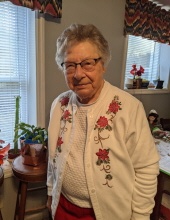 Myrtle Hamilton Beeler 92 of Woodstock departed this life Tuesday October 19, 2021, at her residence surrounded by her loving family. Mrs. Beeler was born on March 28, 1929, in Porter, Indiana to George and Frances (Draves) Hamilton. She was number seven of eight children.

Myrtle retired from Traveler's Insurance Company in 1986. She and Howard retired to Oxford, Mississippi in 1987. After Howard's death in 1993 she moved to Florida in 1997 where she played the organ at assisted living and retirement homes, volunteered at the local hospital and was active in her church.

In 2013 she moved to Woodstock, Georgia to live with her daughter Audrey, where she remained active in the local senior community until her recent illness.

Myrtle was preceded in death by her parents, 3 brothers and 4 sisters, her husband Howard, and her granddaughter Cynthia Beeler. They had seven grandchildren, 12 great grandchildren, and one great- great- grandson. Services to celebrate the life of Mrs. Myrtle Beeler will be Friday October 29 at 11:00 Am in the chapel of Rose Hill Funeral Home in Rocky Hill, CT. The visitation will be Thursday October 28, 2021, from 5:00 PM until 7:00 PM. Mrs. Beeler will be laid to rest beside her beloved husband following the service. In Lieu of flowers please make memorial contributions to a charity of your choice in memory of Mrs. Beeler.

Poole Funeral Home and cremations services of Woodstock, Georgia is in charge of local arrangements.
To order memorial trees or send flowers to the family in memory of Myrtle Beeler, please visit our flower store.