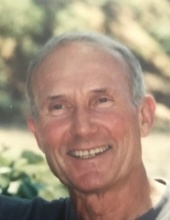 After earning a Bachelor of Science degree in Physical Education from Long Beach State College, Leith entered the U.S. Naval Officer School in Newport, Rhode Island and then later served as a commissioned officer in the U.S. Navy for four years. Later in his work career he would become a teacher and commercial painter.

Leith was a member of First Baptist Church of Woodstock where he joyfully served and sang in the Worship Choir as well as the Senior Choir. Leith’s greatest desire was to minister and serve his fellow Seniors and share the Good News of his Lord and Savior Jesus Christ with both young and old alike.

Leith is survived by his wife Barbara “Babs” Hawks 84, his son John Hawks, his daughter Jane Hawks as well as his sister Donna Ivanoff.

His memorial service will be held on Tuesday, November 2, 2021 at 3:00PM at First Baptist Church of Woodstock, in Woodstock, GA. In lieu of flowers please make a bible donation to The Gideons International at SendTheWord.org
To order memorial trees or send flowers to the family in memory of Orville Leith Hawks, please visit our flower store.