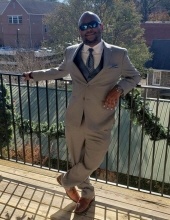 Peter H Kamau AKA “KK”, “Pete”, and other nicknames along the way, was born on 02/22/1982 as the third born of John and Regina Kamau Njaga.  He is the sibling to his big brothers Charles (”CK”) and Francis (“Frank”), and younger brother Paul. Peter was born in Nairobi, Kenya, and his family immigrated to the United States in the 90's. They first settled in Baltimore Maryland and eventually moved and made Georgia their home. He was preceded in death by his grandparents, Aunts, Uncles, and Cousins.


Peter was blessed with a very large family where his family and friends were a significant part of his life. He graduated from North Cobb High school and Kennesaw State University.  He was career driven and a highly motivated small business owner with his own Insurance Agency in Woodstock, where he was the recipient of several awards.


Peter never met a stranger and he could have a conversation with anyone, anywhere, anytime. Peter had a very compassionate, generous and gentle heart. He was a big supporter of our Armed forces (both Active and Veterans) and local law enforcement. Having not served himself, he took it upon  himself to support the wounded warrior project whenever possible. His love and passion for his Country motivated his involvement with the local community and he found ways that he could support organizations close to him. He was a board member of the Cobb County DUI Court Community Advisory Board, promoting their mission. He could also be regularly found attending the Woodstock small business owner meetings and he was the President of his HOA.


His love for sports is like no other. He was absolutely a fan of his teams. One of the biggest fans for the Falcons, Georgia Bulldogs, Atlanta Braves, and the Baltimore Ravens. If he could not attend the game in person it would be a good bet that he would be watching it and shouting loudly at the TV.


Peter regularly attended Woodstock City Church and his faith was an important part of his life that carried him to the end. Peter left us some big shoes to fill and he will be missed by many.


To order memorial trees or send flowers to the family in memory of Peter Hudson Kamau, please visit our flower store.