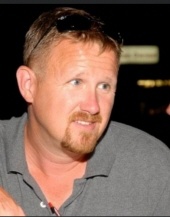 Rick Allen McAbee' story started in the Midwest in 1965. When he was born, he cut his own umbilical cord because the doctor was too slow, and Rick had things to do. On August 31, 2021, he finished the last things he needed to do and went to be with Jesus.Rick was born in Akron, Ohio to Phyllis Holt and Paul McAbee. He grew up poor and didn't know his father throughout his entire childhood. Rick had a difficult start in life, and if you knew him at all, you knew he was an over comer. He started serving his country as a teenager in the Ohio Civil Air Patrol. From there he went into the US Air Force and became a military police officer. This began his incredible love for travel. He was stationed in Okinawa, Japan on his first assignment. From there he was stationed in Wyoming. After his Honorable Discharge from the military, Rick tracked down his father in Georgia. Despite spending a lot of his childhood in the foster care system, family became important to Rick. He was determined to have a relationship with his father, darn it, whether Paul wanted it or not. And that is exactly what he did. Rick was a forgiving man, and he moved to Georgia and took his father' last name.It was in Georgia, Rick began showing his knack for business ideas. He was delivering pizza for two different pizza shops when he began his first business, Eagle One Detailing. If he had a business idea, he would learn everything there was to learn and then make it happen. He started a pager business and taught himself how to repair pagers. It became the 2nd largest pager business in Georgia. He taught himself about after market car parts, including installing computer chips into cars. He taught himself all about auto glass. And in the last year and a half, Rick even taught himself to be a stock trader. He was successful at everything he put his mind to. Seven years ago, he hit a rough patch and lost everything. This didn't stop him, and Rick did what Rick does: he never gave up and worked his ass off to get back on top. As a kid, Rick was a caring big brother. He was constantly teaching his younger brothers valuable lessons, such as how to escape a headlock, how to dodge darts, how to escape a "Dutch oven,"� and how to break into your own home during wintertime when you are bare foot and "accidentally"� locked out. He was always willing to help others and was quick to help women test their birth-control device. He cared about young women, so this was only a service he offered to women under 28. Rick loved much and loved passionately, but there was only one girl that ever captured his heart completely"�Her name is Mackenzy McAbee. Rick' proudest achievement in life was his daughter, Mackenzy. Rick took to fatherhood very naturally for a man who didn't know his own father growing up. He was a very involved father. He learned to do his daughter' hair, how to paint nails. He was always at her school events and was even on the PTO. He instilled in her the qualities he knew would help her be successful in life. His daughter was everything to him. He was the anchor of the family and would travel wherever needed to visit extended family. Rick, quite literally, never met a stranger. He could and would talk to anyone about anything (many times, to the annoyance of his family). Rick had a heart for encouraging others. Over the decades, his home was a halfway house to innumerable friends, and even strangers, who were down on their luck. Rick told EVERYBODY to let go of their past mistakes and hurts and live their best life. Rick had an incredible life. He jammed 1000 years into the 55 years he spent on this planet. There is no doubt he is already sharing all of his great ideas with God about how to spruce up Heaven and get more people there.Rick will be missed by many, especially Jack Daniels and Coca-Cola companies who are devastated by his death and send their condolences.Goodbye Rick. We will miss you father, brother, son and friend.The service will be Livestreamed click on the link below to watch at 2 p.m.https://client.tribucast.com/tcid/1262152586

To order memorial trees or send flowers to the family in memory of Ricky Allen McAbee, please visit our flower store.