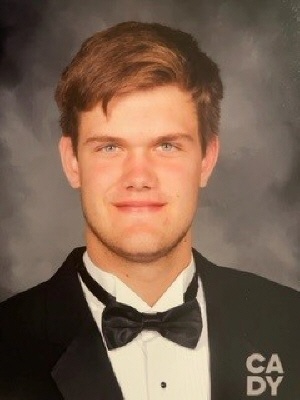 Robert (Robbie) Ronald Roper Jr. of Roswell, 18, a high school quarterback, died unexpectedly on December 22, 2021. He leaves his parents, James and Jennifer (Trammell) of Roswell, and his beloved sister, Breanna Roper of Oxford, MS. In addition, he leaves his grandfather Robert (Diane) Roper Sr. of Woodstock, GA maternal grandmother, Diane (Joseph) McMahan of Woodstock, GA, maternal grandfather, John F. (Mary Lou) Trammell, Jr. of St. Augustine, FL, paternal grandfather,, three aunts, Carol (Derrick) Orr of Dalton, GA, Janet (David) Hall of Pueblo, CO, Elizabeth (Justin) Dailey of St. Augustine, FL, an uncle, Timothy (Denise) Trammell of Winder, Ga, along with 10 cousins. Sports were Robbie’s life. As a child he played many sports, but football was his passion. Ever a diehard Falcon’s fan, his love of football propelled his performance at the sport. A senior, at Roswell High, he led the Hornets to a 10-3 record and final top-10 ranking in Georgia’s Class 7A. He threw for 3,010 yards and 37 touchdowns this past season. Recently he was named Offensive Player of the year by his region’s coaches for Region 5, Class 7A. Not only was Robbie a talented athlete, but he also exceled in the classroom as an honor student. He had received numerous scholarship offers from colleges across the country to play football. Robbie was a leader both on and off the field. A great quarterback, he was an even better teammate. His energy and optimism were contagious. Hard-working, honest, and humble by nature, he was profoundly proud of all that he and his team had accomplished. For all who knew him, Robbie will be remembered as a compassionate, smart, charismatic person with a great sense of humor. He was a great friend, brother, and son who will be sorely missed. Visitation will be held on Monday, December 27th at Poole Funeral Home, 1970 Eagle Dr, Woodstock, GA 30189 from 5:00 to 9:00 PM. A Celebration of Life/Funeral service will be held at the First Baptist Church of Woodstock, 11905 Hwy 92, Woodstock, GA 30188 at 11am on Tuesday December 28th. Masks are recommended. We would like to thank the Roswell and Woodstock communities and especially Roswell High School for their outpouring of support and concern to the family. In lieu of flowers, the family suggests that contributions be made to the Robbie Roper Scholarship Fund at https://www.gofundme.com/f/robbie-roper-scholarship---fund?qid=dcd44d6bb73072ca6751121ec58434c4 Active pallbearers will be Alex Pfaffenbichler, Amari White, Brooks Bortle, David Cournoyer, Shaun Spence, Reese Allen, JT Hunter, Preston Lawrence, and Zach Mason. Online condolences may be made at www.poolefuneralhome.net

To order memorial trees or send flowers to the family in memory of Robbie Ronald Roper, Jr, please visit our flower store.