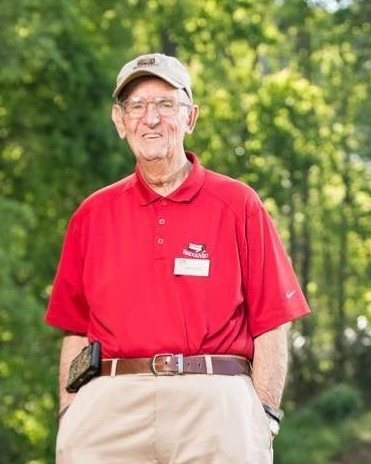 Jerry was the son of Woodie N. Pope and Estelle (Dennis) Pope.  He was born in Columbus, GA and grew up in Phenix City, AL.  Growing up he loved playing baseball and had fond memories of his time on the Central High School baseball team.  After high school he attended Auburn University and began working for Georgia Power, Jerry then became an Industrial Engineer working in the trucking and shipping industry for over 40 years and retired from Central Freight Lines.  His work led him to live in many places including Georgia, Alabama, Missouri, Nebraska, Tennessee, Germany, Florida, and Texas.

After retirement he enjoyed working at several golf courses in the Carolinas and finally at Bridgemill Athletic Club in Canton, GA.  Jerry enthusiastically cheered on his Auburn Tigers and Atlanta Braves.  He enjoyed watching sports of all kinds but his favorite in the last years of his life was watching his youngest three granddaughters on the volleyball court.  When he wasn’t watching sports he enjoyed golf, fishing, hunting, traveling, studying, and teaching the Bible and sharing endless tales of days gone by.  He was a member of Kennesaw United Methodist Church and the Phenix City Central High School River Rats.

Jerry was preceded in death by his parents and his younger brother, James “Jimmy” Pope.

In lieu of flowers, the family asked that donations be made to a charity of your choice or simply continue to share kindness with caregivers.  You never know how much a small act can mean in times of heartache.

To order memorial trees or send flowers to the family in memory of Robert Gerald Pope, please visit our flower store.