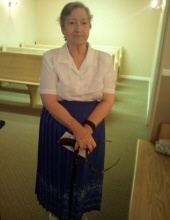 Shirley Temple (Davis) Holden was born August 2, 1937 to Emma Lee “Tiny” Davis. Raised on a farm she stayed around the homestead and helped her mother and family with normal household things. She would spend summers playing with her cousins and siblings. She attended Berry College before meeting Pete Holden in 1953. A year later they married and moved into the old house across the way from her family’s homestead. From 1957 to 1970, she bore her 5 children. Years later she would also help raise 4 of her grandchildren, whom she loved as much as her own.


Shirley dabbled in many different hobbies from planting trees and flowers to doing needlepoint and making pottery. She was an avid reader. She loved a good mystery. She loved calling all her family on the phone and talking for hours. Shirley loved many things but nothing could compare to the love she had for her family. Shirley was as kind hearted as they come. She would always see the good in every person. She was a true angel on Earth.


She is survived by her sister,  Willa Mae Richardson of Atlanta,Ga; Husband, Pete Holden of Jasper, Ga; Daughters, Susan Holden, April (Eugene) Lowe and Nancy Holden of Ball Ground, Ga; 10 Grandchildren and 14 Great Grandchildren She is preceded in death by her children, Matthew Holden and Lori Casey and Grandson Daniel Holden

To order memorial trees or send flowers to the family in memory of Shirley Temple Holden, please visit our flower store.