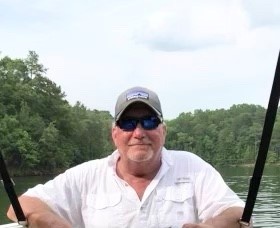 Stephen Joseph Dobbs of Woodstock, GA was born to Dorothy and Richard Dobbs on September 19, 1950 in Ottawa, IL.

He is survived by his wife Margarita Dobbs and their children Nicole, Brittany (Jeremy), Michelle (Whit), Kris (Melissa) and Megan (David.) His sister, Deb and nephews Tag and Casey Galvin.

The time he spent at the family’s home at Dobb’s Landing was the backdrop to his most cherished moments on Lake Hartwell. Hunting, fishing & four wheeling were his favorite activities.

Daughter, Brittany Dobbs Hudson, perhaps said it best “he made everyone around him feel the joy of life. He was so loved, he taught us so much and touched so many hearts. Just the most amazing man.”

‘Dobber’ as he was known to many, lived life to the fullest. Making memories with family and friends was paramount.

Steve served during the Vietnam War as a member of the United States Army.

He took his last breath surrounded by his loved ones.

In lieu of flowers the family requests that donations be made in Mr. Dobbs name to the Melanoma Research Foundation.

To order memorial trees or send flowers to the family in memory of Stephen Joseph Dobbs, please visit our flower store.