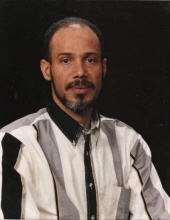 Mr. Jean-Bart served in the Hatian Army from 1980 until 1995, attaining the rank of Major. From 1995 until 2000 he served on the Hatian Police force. He was a professor at the university in Haiti where he taught Civil Engineering. He also had a Masters Degree in Civil Engineering from Southern Poly Tech. Mr. Jean-Bart loved music but was especially fond of Gospel and instrumental Haitian music.

The funeral arrangements for Mr. Jean-Bart will held on Saturday, November 20, 2021 at eleven o’clock in the morning in the chapel of Poole Funeral Home with Father Junot Nelvy officiating.  Interment will follow in the Rolling Hills Memorial Gardens.

The family respectfully requests that all floral arrangements be omitted and that memorial contributions be made to the Shepard Center in his honor.

To order memorial trees or send flowers to the family in memory of Thomas Kerns Jean Bart, please visit our flower store.