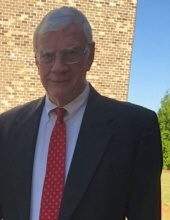 William Howard Edwards (Bill or Billy) of Woodstock, passed away surrounded by his family on Saturday, January 29, 2022.  He was preceded in death by his parents, Hugh Chester Edwards, and Arline Roberts Edwards and his grandchildren Brendan and Paige Campbell.  He is survived by his wife of 53 years, Suzanne Musser Edwards, his oldest daughter, Sarah (Tom) Campbell and his youngest daughter, Anna (Jason) Gautney.  Bill is also survived by three of his grandchildren; Grace and Lily Campbell and Taylor Gautney.   He is also survived by his four siblings, Marceline Waugh, Jaqueline Palmore, Robert (Anita) Edwards, Randall Edwards, his sister-in-law Elizabeth (Doug) McLellan and several nieces, nephews and great nieces and great nephews.

Bill was born on October 11, 1943, in Gordonsville, VA.  He grew up in rural Orange County, Virginia.  His family attended Zion Baptist Church.  Bill graduated from Orange County High school in 1962 where he participated in basketball, football, and track.  He then went to Virginia Tech on an athletic scholarship.

While at Virginia Tech, Bill majored in Civil Engineering.  He was a three-time letterman and an honorable mention All American football player for the Hokies as well as Tech’s first Academic All American.  Also, during his undergraduate years, he was a member of the Monogram Club, Omicron Delta Kappa, Chi Epsilon and Who’s Who in American Colleges and Universities.  Bill played tight end and linebacker for coach Jerry Claiborne.  His senior year he was co-captain of the football team.  His final season was in 1966 after which he joined the Dallas Cowboys.  Bill then returned to Virginia Tech where he became a graduate assistant with the football team while pursuing his master’s degree in environmental engineering.

After college, Bill went on to work for the health department of the state of Virginia and Wytheville Community College as a Math teacher.  During his 38 years as a practicing professional consulting engineer Bill was instrumental in the growth and development of the companies in which he was involved.  He began working in 1975 for Dewberry and Davis working his way up to a managing principal.  In 1992 he moved to Atlanta with Lockwood Greene Engineers as Vice President and head of Environmental Engineering.  He then formed a subsidiary company of Lockwood Green Technologies where he served as President, CEO and Chairman of the board.  He then accepted employment with AMEC and was responsible for developing safeguards and security initiatives for the company.  In 2006 Bill went to work for Stantec to take over lead responsibility for their US southeast operations as Vice President.  While with Stantec he assumed responsibility for all US operations east of the Mississippi from the great lakes and Canadian border to Florida.  Throughout his career Bill was a leader in providing support to local governments and agencies following floods and other disasters.  He has also worked to support major security issues related to nuclear weapons development safety and storage.

Family was very important to Bill.  He worked hard to be sure that his family was taken care of and knew his love.  He and Suzanne met in Abingdon, Virginia while he was working for the health department.  They were married in August of 1968.  He enjoyed taking his daughters and later grandchildren to Virginia Tech football and Auburn University football games and bowl games.  He also enjoyed attending other sporting events such as the Braves games, Harlem Globetrotters, and many more.  He attended many of his daughters’ dance recitals and competitions as well as his grandchildren’s chorus concerts, dance recitals, golf tournaments, plays, band concerts, sporting events and horseback riding lessons.  He had a strong faith and was active in many churches throughout the years.  Bill will be remembered for his skills at meeting people, getting to know them, and spreading warm hugs.

There will be a celebration of life held for Bill on Saturday March 19, 2022, at 11:00(EST).  Visitation with the family will be prior to the celebration.

In lieu of flowers, the family has several places you can make a gift in his memory.


Virginia Tech - https://give.vt.edu/  Give to the area College of Engineering and fund Charles E. Via Jr. Department of Civil and Environmental Engineering

To order memorial trees or send flowers to the family in memory of William Howard Edwards, please visit our flower store.