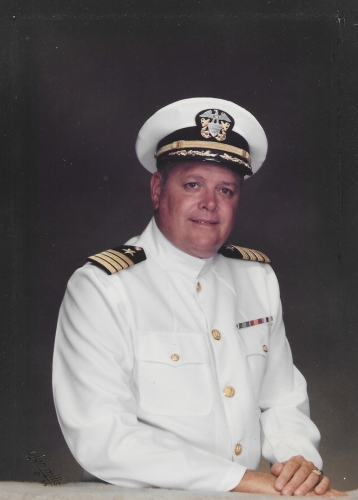 Robert Johnston Ayers, 85, passed away from complications of Parkinson’s Disease in the comfort of his home surrounded by his family on March 15, 2021.
Robert attended Exeter Academy and graduated from the University of Pennsylvania in 1959, with a bachelor’s degree where he played varsity football and lacrosse. He loved sports. Over the years his favorite teams were the New York Giants and the Florida Gators. Robert served in the United States Navy for 30 years, both active and reserves, until his retirement as Captain Ayers in 1988. Also, during this time, he was a general contractor and worked alongside his father in Rhode Island, eventually taking over the business of Ayers, Hagan, Booth, Inc. He and his family moved to Florida in 1978 and continued as a general contractor and became owner/broker of Keim Associates Real Estate, Inc. for over 40 years. He was very well known in the community and volunteered for decades as a member of the Kiwanis Club of Cape Coral. He also served as a tireless member of the Chamber of Commerce. It has been said by many that life was better with Robert in it.
Robert is survived by his wife Carole of almost 55 years, daughters Jane (Sal) Goodwin, Nancy Ayers, Tacy (Ryan) Nettleton; twin sister Marcia (Jon) Tingelstad; grandchildren Robert S. Ayers, Casey Goodwin, and Jack & Reed Nettleton; many nieces, nephews, cousins, extended family, and many close friends. Robert was preceded in death by his parents Charles and Florence Ayers. Robert was a loving husband, father, grandfather, brother, uncle and a dear friend to all who knew him.
A special thank you to the staff of Amedisys Hospice for their loving care and support during his final days. They are extremely special people. Also, the family would like to thank Rev. Dean Vonfeldt for his support of our family and his prayers during this exceedingly difficult time.
Memorial donations may be made to the Michael J. Fox Foundation or the Parkinson’s Foundation.

Plant a tree in memory of Robert by clicking here.
To send flowers to Robert's family, please visit our floral store.

A service summary is not available

Plant a tree in memory of Robert
An environmentally-friendly option

Plant a tree in memory of Robert

Share a memory of Mr. Robert Ayers
Plant a tree in memory of Robert
An environmentally-friendly option

3 trees planted in memory of Robert

You are All in Our thoughts
Curt & Susan

A Memorial Tree was ordered in memory of Robert Ayers by Curt & Susan.  Plant a Tree

I worked for Bob for 25 years at Keim Associates - He was My Boss, My Mentor, My Friend. He will be truly missed - But we All have Wonderful memories of those times, those will never go away - Til we meet again Susan

We were friends from the 5th grade on until now. Bob will be sincerely missed. Rick and Hope.
Rick

A Memorial Tree was ordered in memory of Robert Ayers by Rick.  Plant a Tree

Plant a tree in memory of Robert